Pete Holliday, the man with the impressive reach, one of the top UK paddlers (just finished 2nd in the Frostbite Finals) on his recent signing with Naish.

Congratulations, Pete on signing with Naish!

For those who don't know you, tell us a bit about yourself!

Well I’m based in Bournemouth, South Coast which seems to be the hub for some of the UK’s best paddlers. I’m fortunate to have local training partners like Mark Slater & Ryan James, although we all compete against each other so there’s a fair bit of secret training on our own too J I started racing Stand Up’s about 2 years ago being a short board surfer & frustrated by the lack of waves where we are it seemed like a great cross over to get on the water more often.  I loved the competitive side having been fairly into fitness but never really having a competitive outlet. I’ve progressed pretty fast though the ranks from the back of the pack to the front, proof that hard work pays off!

What were the reasons for switching from Starboard to Naish?

Well it just seemed right, the Naish boards are absolutely fantastic and the UK distribution is local to me here so it just tied up nicely. Naish were looking to expand more into the UK race scene so I was perfectly placed to help do that & get their boards on the water & on the podium.

Which Board will you be riding?

Naish have a great line up of race & surf shapes.  For racing I’m riding the 12’6 carbon Javelin right now, there’s a hollow carbon 14ft version due to hit the UK in a couple of months so I’ll be getting on that as soon as possible, it’s a really, really fast flat water shape & at a reputed 9kg will suit me perfectly.  We’ve finally started to see a bit more downwind paddling in the UK so I’ll be on the Naish 17ft whenever possible for downwind races and for ocean racing the 12’6 / 14ft Glide are perfect as they are slightly wider & feature a little bit of rocker to cope with swell.  For the surf there’s a new 8’3 Hokua due towards the end of the year just in time for the Watergate Bay competition & winter swells. The boards are possibly the best build quality of any SUP I’ve seen, they are fast shapes, really light weight & they look stunning too. Congratulations, Naish! 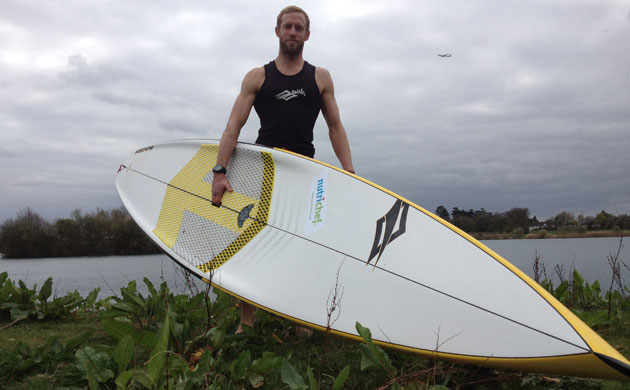 And how about paddles?

Currently I’m paddling the ZRE but I’m looking to do some testing of the Naish Kaholo full carbon race paddles shortly. If they’re good enough for Kai Lenny then I think they must be pretty awesome 🙂

What's your next race and what are your plans for the year ahead?

We’ve just had the final of the Frostbite winter series where I placed second which was a great result after some close races.  We’ve got Hayling Island this coming weekend & Head of the Dart the following so an action packed 3 weeks.  I’m planning a couple of crazy endurance challenges with Mark Slater, watch this space as our first holding dates are coming up! I have to say a massive thanks to my sponsors Naish UK, Nutrichef.co.uk, healthycoffeecompany.co.uk & chidrinks.co who are all really supporting me through this season.

Thanks Pete, and good luck for Hayling Island!

Read more from Pete in his blog.