There were many races to choose from last weekend, the Swiss Champs in Lausanne, the German SUP challenge in Leipzig and the Race in Venice.

Being based in Munich, the choice was easy for me, Venice was closest and for sure the most interesting location. Only downside: Driving over Brennero in 33 degrees with heating on full blast, as engine otherwise gets too hot. Thankfully, my friend Rob, who had already magically repaired the broken oil pressure line in Nogaredo, found some time on Friday to look into the heat problem. Campervan pimped, a brief swim in the cold Isar water, a quick stop at Fanatic Oberhaching to load another board for Belar and at 8PM I was on the highway A8 again, to go over Brennero for the 5th time in a month. Yes, I should have left earlier, but fixing the heat problem was definitely worth the delay….

At 2:30 AM I had made it to about 100km before Venice and retired for the night, to continue the journey at 7:30 (it was too hot to sleep anyway), a few hours and a nice ferryboat ride later I arrived at the first event location, Blue moon Beach on the beautiful Lido di Venezia Island.

The weather was great, the beach gorgeous, many familiar faces and lots of event tents where you could check out the latest SUP equipment and there were even some waves to be surfed. Most racers however left their SUPs in the van and rested in the shade to be fit for the 8k race which was on at 5PM. That involved driving to another site, Club Nautico S. Marco on the western coast of Lido Island, which is more protected from the swell, so that would be  a nice flatwater race. The race was a 90 degree course with 2 turns around bouys (1 turn for the ladies, the race distance was shortened to about 4-5km).

About 50 men and women competed in the long distance race with the harbor and the setting sun in the back and were  accompanied by traditional venice boats, an amazing spectacle to watch!

Pietro Fazioli (Hobie) won the mens race after an amazing paddle, he was followed by Giordano Bruno Capparella (Hobie) and Fabrizio Gasbarro (Fanatic Fly Race 14’), next came in Leo Nika, Danielle, Stephan Gölnitz (Starboard 14’), Belar Diaz (Fanatic Fly Race 12’6 – 3rd on 12’6), Nicole, Davide and Leonardo (sorry don’t have the official results yet, all this s from the top of my head, if I missed anything email me petra@sup-guide.com).

The sun was setting and it was time to go back to the other side of the island for the price giving ceremony at Blue Moon Beach, which was followed by an amazing show and party. Most riders including myself however retreated early as they had been informed they have to be at the ferry back to Venice at 6:45 AM the next morning for day 2 of the event…… 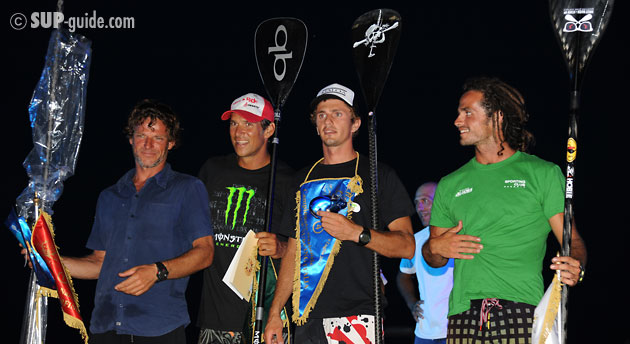 Sunday was certainly the highlight, a paddle parade through Canale Grande. The paddle started at Trochetto and went all the way through the famous canal, passing all the famous sights like St. Marks square and arrived in front of the Arsenale. It was a totally spectacular 5km paddle on a very busy canal where there were so many boats and gondalas with a power paddle in very choppy conditions on the bay at the end.

The parade arrived at 12:30 everybody was hungry and thankfully there was some great food served. After a short race, there was another race, a 1km sprint race with 2 laps around buoys on the choppy Tronchetto-lido di Venezia canal.

This time the winner  all Paddlers had to race on 11’ fun shape Boards of RRd International, who together with Nissan, was main sponsor of the event. So different from Saturday, where there were no special prices for the 12’6 winners, this time the conditions were equal for all riders. Naish Teamrider Leonard Nika won the sprint race, followed by Fabrizio Gasbarro. Roberta Mariani won the girls sprint race. Congratulations to all the winners!

After the price giving cererony and a short break it was time to paddle back the 5km back to Tronchetto again (for those who ha down boards, those who had borrowed RRD boards were taken back on a boat). This time the paddle was not along canale grande but through all the small canals, equally impressive, but very slow as the canals were very narrow and there was a lot of traffic.

At 18:00 the first paddles arrived back at their vans, totally exhausted from 12 hours in the heat but equally stoked and happy. Big thanks to Eliana / invenice.org for organizing this totally impressive and amazing event and hopefully see you all next year! 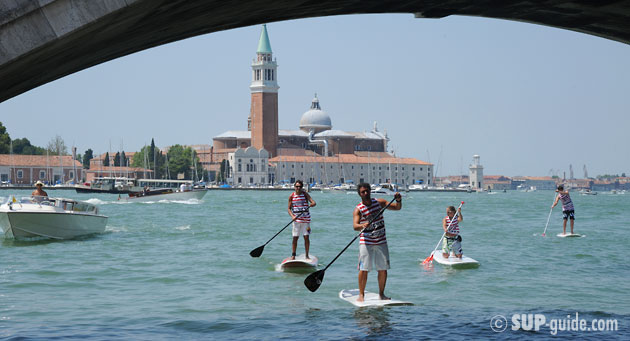 More pics and more info will go up soon. Like us on www.facebook.com/supguide for updates!