This summer, a very special SUP Race took place in the British Virgin Islands as part of the HIHO Highland Spring Adventure. We have secured permission to use the awesome helicopter photos by Andreas Seibold/TUUCI (thanks!), so here comes the painfully delayed report of the Painkiller Cup….

It was a supposed to be 12 mile downwind race (but turned out to be 16 miles) which sent riders from Trellis Bay on Tortola’s North shore to Jost van Dyke, with the finish at the infamous “Soggy Dollar Bar”, which takes it’s name from the sailor’s swimming ashore to spend wet bills. It’s also the bar that invented the “Painkiller”, the BVI’s Painkiller delicious, yet lethal cocktail of rum, coconut, pineapple orange juice and nutmeg.

It was a team race for three riders, two men and one woman. Each team was accompanied by a Yacht. The rules were simple, there were two points by which you had to have switched riders and the riders were not allowed to touch the boat or paddle in the boat’s wake, other than that it was freestyle, you could switch as often as you wanted and there were no rules how far each rider would have to paddle. The winners would receive a whopping 4000 US $ Dollars of prize money.
Different from the HIHO SUP Races every day, this race was open to other riders who had not competed in the HIHO. All in all there were 6 teams, 4 from the HIHO (Team Fanatic, Team Tucci, Team Antigua, Team Aloha Waves) and 2 from St. Thomas, plus myself being the fifth wheel from the Fanatic team having the stupid idea of doing it solo. 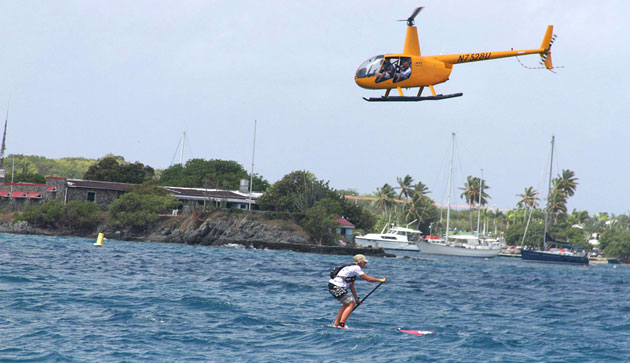 Here’s how the race went down for Team Fanatic: The catamaran dropped the riders off East of Tortola for a water start (with a helicopter circling taking photos from above). Chase Kosterlitz would go first. He paddled about 1-2 miles gaining a small lead over the St. Thomas team before switching over to Sarah Bryne, who paddled about a mile, then it was Belar Diaz’ turn. Chase and Belar continued to switch about every 20 minutes. 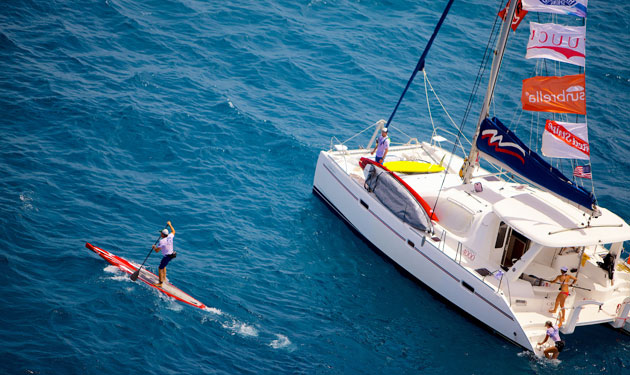 The first few changes were a bit crazy, the boat going at full speed of about 6-7knots trying to catch up with the paddler, the next paddler trying to jump off the boat to get as close to the SUP as possible and the other paddler climbing back into the boat in the rough seas. After some practice the changes were getting better, Belar and Chase did an awesome job making the most out of the waves and started to gain a solid lead over the St. Thomas Team. 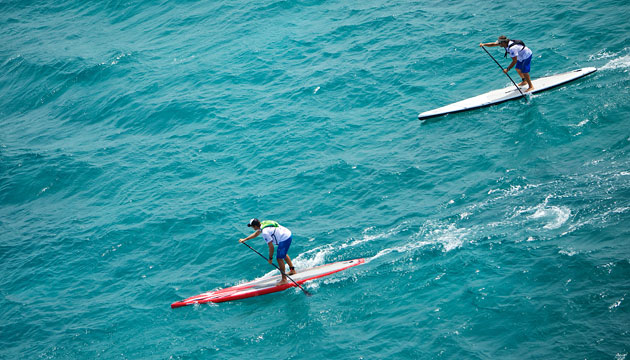 Seeing this, the St. Thomas team went for a wider line on the outside, hoping to catch bigger swell and trying to avoid the rebound from the coast, for a while they kept a parallel line to the Fanatics, but the actual distance they had to paddle was increasing because of the outside line. 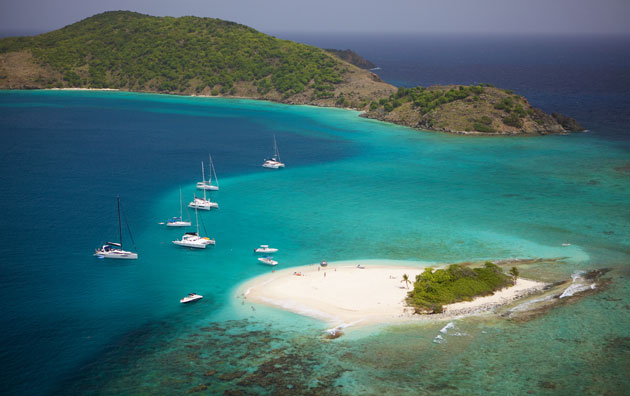 The finish at Jost van Dyke was awesome, a huge crowd on the beautiful beach with white sand appropriately named “White Bay Beach” awaited the riders at the infamous “Soggy Dollar Bar” and applauded Sarah, who had the honors of paddling the final leg for Team Fanatics, securing the overall win. Local Team St. Thomas I  (Colin Butler and Gail & Eric Walker) came in 2nd and Team Antigua with Shannon Falcone (2010 America’s CUP winner with the Oracle Team USA), Nik Bohachevsky and Joy Chien were 3rd. After the race, the riders celebrated in style with painkillers and had time to learn some pirate language. Apparently, Aye aye! means “I’ll get right on that sir, as soon as my break is over.” Arrr! means “I agree,” “I’m happy,” “I’m enjoying this painkiller” and Avast! “No way!” or “Get off!”. After many “Arrrr!” it was time to paddle back to the yachts and as there were less SUPs than riders this meant 2 riders paddling on one board, normally not a difficult thing, but after a few painkillers quite a funny, shaky experience…. 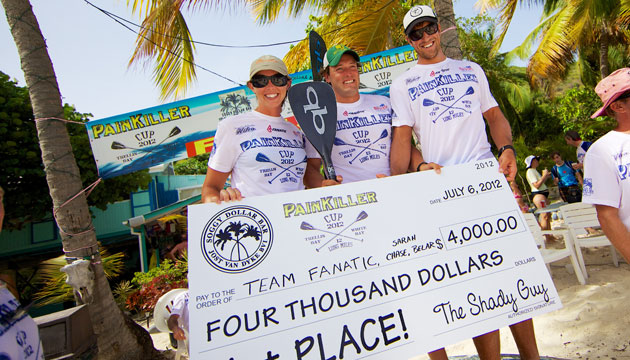 Here is what Chase Kosterlitz (Team Fanatic) said after the race: ”With a media helicopter circling overhead, I started the first leg for Team Fanatic. There is nothing more exciting than having a helicopter zoom around as you surf bumps in the open ocean. Open ocean transitions were a new and exhilarating part of this stand up paddle race. As the boat pulled up to the current paddler the next teammate would dangle off the back of the catamaran. After 16 miles of surfing waves and fighting off our opponents, Team Fanatic came away with the win. This event is sure to become one of the top stand up paddle relays in the world. The Soggy Dollar’s signature PainKiller cocktail was a perfect ending to a fun day on the water.” 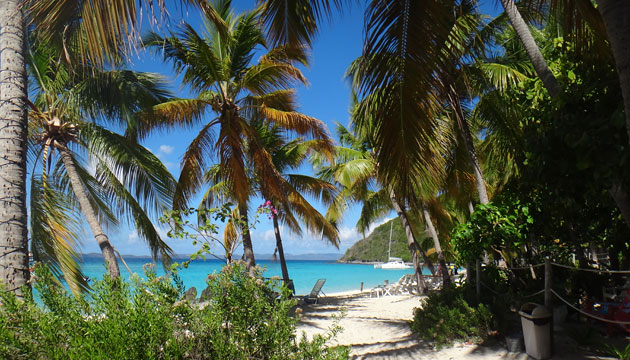 Here is what Colin Butler (Team St. Thomas I) said about the race: „The Painkiller Cup was the most fun we have ever had in all the SUP races we’ve been to. It was like the fast and furious of SUP! We all have competed in plenty of solo races but this was our first ever team race!  Transitions went pretty smooth as our captain Dean Dunham skillfully worked the boat for two STT teams! To transition, the “on deck” team member dove overboard down sea with their paddle and waited there to intercept the oncoming paddler. After the swimmer/paddler transition was complete the boat would circle back to pick up the previous paddler who was now swimming. Afterwards the boat would then go assist team STT2 in the same manner. We (STT1) paddled as fast as we could switching out riders every couple of miles in the fashion of boy girl boy the whole way. We had hoped by catching the larger swells further from shore would help us keep team Fanatic from getting to far ahead. It was a nail biter until the last few miles as we realized then we had no chance of catching them in the flats. At one point during the race team Antigua was pressuring us on the same inside line that Team Fanatic took! In the end however we were in a pretty commanding lead for second place at the finish line. Whew!!! Definitely Looking forward to next years Painkiller Cup!!“ 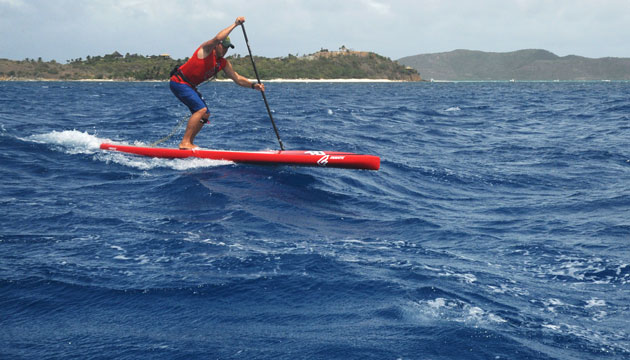 Here is what Belar Diaz (Team Fanatic) said after the race: ”The Painkiller cup turned out to be an exhilarating 16 mile downwind, the team experience was a blast, the changes from the boat were great, with the first ones being a complete disaster to one were Chase literally landed on top of the board rodeo style. The 14’ Flatwater Fanatic worked unbelievably well on the downwind conditions. The greetings at the finish line with a Painkiller drink and great food were something to remember. Certainly a beautiful course in a unique location, that is set to become one of the greatest races in the Caribbean.” 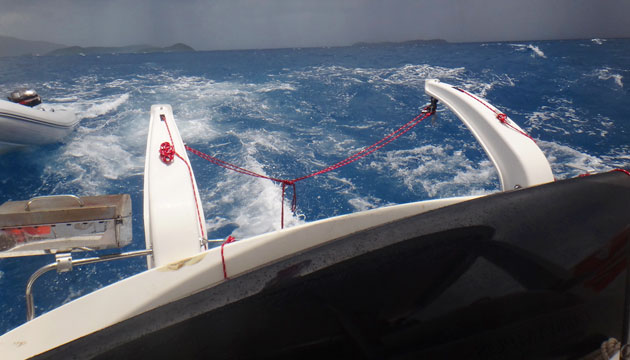 As for myself doing it solo, I did not have an escort boat, as our boat with captain Eduardo was accompanying Chase, Belar and Sarah. I was told I could try solo as long as I kept up with the teams, if I failed to do so the Yacht accompanying the last team would be ordered to pick me up. I kept up with the last team for about 2/3 of the course, then came the unprotected part of ocean between Tortola and Sandy Cay, the ocean was rough, the waves were getting really big and I started falling off quite a bit,  costing me time, so the other team was a few hundred meters ahead when the captain was told to take me in. I boarded the Yacht, got really sea-sick after wrestling the 14′ board on deck in the rough waters, went to the toilet, threw up, got back on out, ate a few crackers and had some water. We could already see Sandy Cay on the horizon, so I knew it wasn’t  that far anymore. I asked the captain if he had told Andy that I was on board, he was like “Yes, I told him you are safe and sound!”. I’m like “OK, great, thanks for the ride, sorry, I can’t stay, I’m getting sick on the boat” and jumped back into the water. Thank god, the last part after Sandy Cay was relatively calm and easy again.
Check out this video (thanks to Chase/Watermonkeysup)

Thanks to Andreas Seibold / TUUCI for the awesome shots from the Helicopter and to Colin Butler for the pic with the helicopter! Thanks to Andy Morrell and Soggy Dollar Bar for an awesome event!