What a race! The commentators confusing Travis with Paul Jackson, 10 Racers on a party wave, Jamie Mitchell dropping his paddle, here’s the report….UPDATED: Full report and results

USA’s Brandi Baksic led wire to wire, with room to spare over silver-medalist Angela van Hoof-Jackson of Australia (who finished 3rd in the 220km Elevencity Tour, dubbed the world’s hardest SUP Race and wife to Paul Jackson, who won bronze in the Men’s race, starting for New Zealand). Just over two months ago, the 39-year-old Baksic was more-or-less retired from SUP racing.
“After I got second at the Battle of the Paddle in 2011, I kind of thought, I’ve got a family, a job, lots of wrinkles (laughs), so I was going to be done and then maybe go start doing triathlons again. But then they asked me to be on Team USA, and it’s kind of something hard to say ‘No’ to,” Baksic said. “It’s my first gold, so hey, that’s cool, especially with the inaugural event. I know this is just going to be the stepping stone for future years of really, really good events by the ISA.”
Austria’s Karina Figl won the Bronze Medal, the first the country has ever won in ISA competition, proving that a country without an ocean can produce an ocean sport contender.  Brigette van Askwegen of South Africa won the Copper Medal.
Angela van Hoof-Jackson then made up for the second place by winning another gold medal in the team relay. Congratulations to all winners! 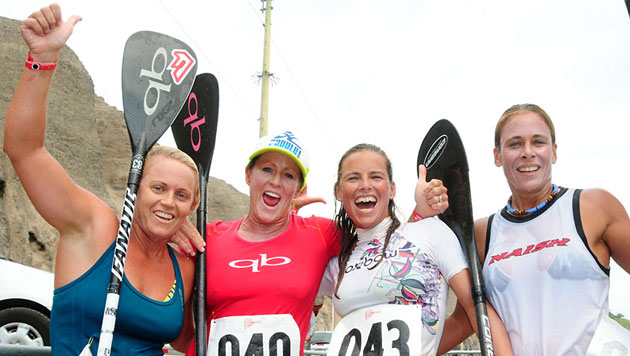 Don’t be confused by the commentators. They kept calling Travis Grant Paul Jackson…..Australians Travis Grant and Jamie Mitchell came coasting into the shoreline, side-by-side on the same wave, composing themselves for landfall. As the wave washed up onto the rocky shoreline, they leapt from their SUP boards and broke into a sprint. Mitchell was first around the yellow flag and made the climb up the rocky berm to the finish line, with Grant tight on his heels. But Grant had won. Mitchell had left his paddle with his board, and in the Men’s SUP Technical Race, the paddle must be in hand at the finish. He would have to settle for second. The REAL Paul Jackson came in 3rd.

“We’ve had a couple sprint finishes between Jamie and I, he’s actually the faster guy, so I knew I had to basically bust balls and try to get there first; that wasn’t the case, but he ditched his paddle, which never happens; we got to the top, and I said, ‘I think you’re supposed to get your paddle,’” Grant explained. “It’s a lot of luck in this race, but at the same time we did everything we could to win, so one-two is unreal.”

After his silver-medal finish, Mitchell was happy with Team Australia’s showing, but not so much with his personal performance. In the preliminary round, he lost his board into the shore after a wave swamped him – having chosen to compete without a leash – dropping him from solidly in first position to the back of the pack. He ended up having to work harder than anticipated to qualify for the Final, coming in second behind New Zealand’s Paul Jackson who had passed him catchin an awesome wave on his Fanatic Fly Race Board. Mitchell did then wear a leash in the Final.
“Look, you can try and have tactics as much as you want but really it comes down to the start and some good luck; we had a good start, [Travis Grant and I] were next to each other and I’m like, ‘Let’s go!” said Mitchell, of the duo’s strategy to pull away early. “I’m pretty bummed that I made a really uncharacteristic mistake for myself, I made two today, I’m not sure what’s going on there, but I’m stoked we got one and two.”
1) Travis Grant (AUS) – Gold 17:00

What’s next? On Saturday there will be the highly anticipated 18km long distance race. A list of the riders is here