The location was absolutely stunning and the weather was great, warm and sunny and the lake was virtually flat, except for the occasional odd waves from the motorboats, which threw most riders of their boards at least once. It was a 14′ race and the course was an interesting one, crossing the lake twice and with 4 stops at 4 different Lidos, in each Lido the riders had to leave the water and run a lap through the sand around a buoy with their boards and paddles. Kind of a long distance beach race crossover format. The running parts were exhausting but interesting as they provided many chances to change place and pass other riders.

Dani Reinhard (Naish) won the men’s race in amazing 1:46:22 before Peter Tritten (Nidecker) and Markus Bögli. Petra Offermanns (Fanatic) won the women’s race. After the race there was free pasta for the riders then the prize giving, which was a nice ceremony, the riders were given handcrafted wooden trophies and flowers and told to pick up the prize money (which was equally distributed between men and women) at the beer booth…. (different from other Swiss races where there were no trophies and riders are just handed an envelope with cash). 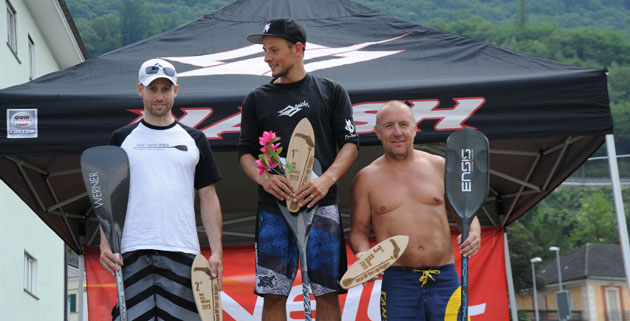 Congratulations to the winners and thanks to www.toucanclub.ch for an awesome event. If you are looking for an awesome place to paddle, check out their beach club, the place is totally stunning. More dates of the Swiss Naish SUP Race Tour are here.