This weekend the Hobie City SUP Race took place in Port Grimaud, France. The event is part of the “PACA beach race series” and organized by La Cigale Surf Club / Yannick Pinaud, which most of you know from the St. Maxime Race already.

The 60 riders were supposed to race 7km, 3 in the canals of Port Grimaud and 4km on the ocean, but the race turned out a bit longer (especially for those doing an extra lap…). The weather could have been better, it was about 15 degrees, mostly cloudy, a few rays of sun but also a few drops of rain, little wind however.

Port Grimaud is an artifical village that began to rise out of the sand dunes on the north shore of the Golfe de Saint-Tropez in 1966.  It is a controversial, extraordinary architectural  experiment of Alsatian  architect François Spoerry. He wanted to create a completely new Venetian style lagoon village. The houses, all of them different, are painted in traditional  pastels, ochre, pink and turquoise,  adorned with shutters and wrought iron balconies with roofs of traditional terracotta Roman tiles.  Paddling the course along the pastel coloured house and yachts “parked” in front of them was certainly an experience, espcially as you are normally not allowed to paddle there. Big thanks to Yannick Pinnault for making that possible. 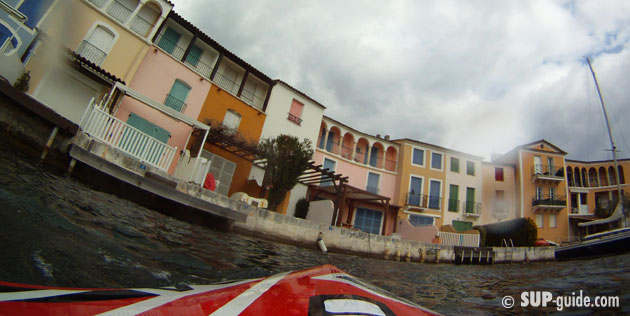 But let’s start at the beginning. After the registration the day started with the kids race, we were encouraged to follow the kids race in order to memorize the course, most of us didn’t do that due to the uncertain weather (it was just starting to rain), in hindsight, as the course turned out to be so confusing we should have maybe followed Yannick’s advice on that……But watching the kids race was great, it was amazing to see so many youngsters in the water.

Next came the adult race, which started around 13:30. The race had a beach start, we first paddled straight into the ocean, then we had to make a turn to the right around a boat and another right into the curved waterways of Port Grimaud. The course was the most confusing course I ever paddled, I had to ask the photographer in the water for the way twice. There was no time to appreciate the pastel colored houses, we were kept busy by ducking under bridges and ensuring we woudn’t hit any of the buoys or yachts in the water. After 4km through the maze of the Port Grimaud waterways we had to do another 3 (or 4…don’t ask…) laps in the open ocean with turns around buoys and running through the sand. All in all a very confusing, demanding race, despite the relatively short distance, everybody was very exhausted afterwards, maybe because of the many turns, the beach running or maybe the first race of the season is just always hard….

Here are the results, congratulations to all winners and thanks to Yannick for organizing this great event! We are looking forward to next year and we hear the distance might be increased and the race will also open to 14′. 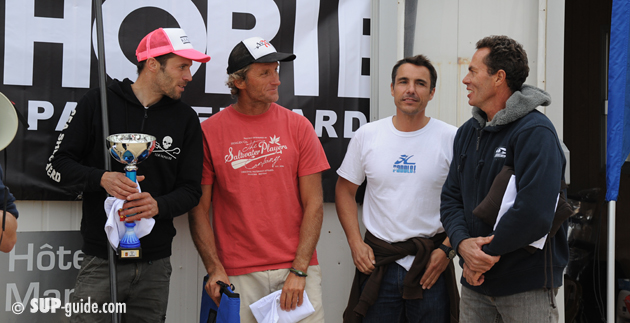