Kai Lenny (Naish) manages to edge to victory today in the World Series Sprint Racing in a familiar battle to the bitter end with friend and adversary, Connor Baxter (Starboard).

Sitting in second through the first 3 legs of the sprint, Kai made his move in the closing seconds of the final lap to the beach, managing to share a bump with Connor as the two surfed their way towards the shoreline.

As they hit the beach however, Kai had just managed to take the lead and sprinted to the victory here on Day 1 of the World Series Stop number 3 in Fehmarn Germany.

This dramatic finish epitomised an incredible day of action here in Fehmarn, as the windy conditions allowed for a couple of short downwind sections for the athletes to surf there way to the inside buoy and finish respectively, and the competition was fierce, from start to finish.

Connor Baxter (Starboard) looked like the man to beat all day, and in the Final heat, took off the start line as if his life depended on it, establishing a lead through the first 2 legs of the course. Kai managed to catch up to him by the inside buoy, but Connor staved off the challenge, consolidating on his lead once again.

However, on rounding the final buoy on the outside, Connor just missed a bump that would have helped him to increase his lead, meaning that both Kai and Connor both caught the same bump, surfing into the finish together. The rest was history, as Kai just managed to get the edge in another incredible match up to go down in the history books between these two Champions.

One thing is for sure, Connor only looked more fueled to take the win at the close of the day, and Kai will be looking to build on his momentum, so there is no doubt that tomorrow will prove to be a battle for the ages. Make sure to stay tuned to the Stand Up World Series facebook page for live updates and highlights from this action packed 3rd stop on the 2014 Stand Up World Series, and 4th stop on the European Cup, presented by Starboard.

Jake Jensen (Fanatic) looked dangerous all day today and demonstrated blistering speed, clearly taking the win in his semi final heat. However in the final, him and Zane Schweitzer (Starboard) got caught up around the first buoy, stalling them both and causing Jake to fall.

Despite a great comeback, Jake had to settle for 3rd place today, which is nonetheless an impressive performance from the young Australian talent and clearly a sign of things to come.

Watch out for Jake in the long distance tomorrow, as he will be looking for gold here at theCamp David World Cup of SUP in Fehmarn, Germany. 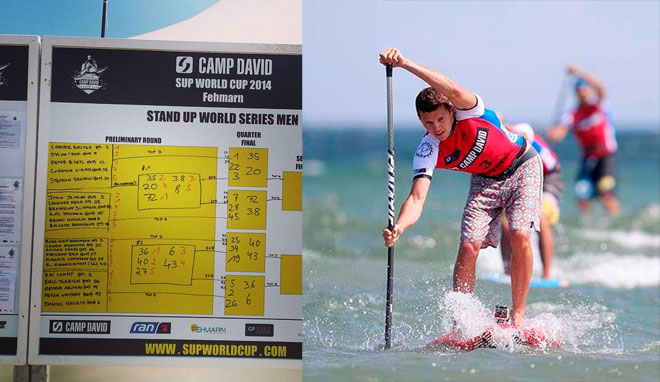 Zane Schweitzer (Starboard) has been on a roll this past month with 3 bullet victories on the European Cup and another strong performance today in the sprint racing. Showing impressive form throughout the day, Zane had a little slower start than usual, and then got caught up with Jake Jensen (Fanatic) around that first buoy pushing him back into 5th.

However, he was able to muscle his way back into it, finishing in a close 4th behind Jake. Again, Zane will be another talent to watch out for in tomorrow’s long distance racing. Make sure to stay tuned for highlights from today’s action and live updates tomorrow from the long distance race on the World Series Facebook page

Casper Steinfath remains ultra consistent with some powerful finishes in the sprints
Casper Steinfath (Naish) put on another strong performance here in Fehmarn today, notching up a 5th place finish in the Sprint Racing. With some powerful performances throughout the day, Casper navigated his way through the intense final heat, finishing in 5th and strengthening both his World Series and European Cup campaign.

Feeling ‘at home’ here in Fehmarn, a matter of hours away from his home town of Klitmoller in Denmark, the young Viking once again showed grace under pressure and will be looking for a strong finish in tomorrow’s long distance.

Lena Augaitis puts on a dominant performance today in the sprint racing
Lena Augaitis from Canada started as she intends to continue here in Fehmarn Germany, with an impressive performance today in the World Series Sprints. WIth a 3 heat format generating the result from the best 2 from 3, Lena was able to secure 2 out of 3 wins in the sprints, convincingly taking the win here on Day 1.

More known for her long distance prowess, we will be waiting to see what Lena can deliver tomorrow as we prepare for the final day of action here at Stop 3 of the 2014 Stand Up World Series. There is no doubt that Lena is a serious threat to be reckoned with, and if she can secure the win here tomorrow, will take the Ratings lead on the World Series at the year mid point.

Olivia Piana (Fanatic) is always a threat at any event she enters, but feeling at home on European turf, Olivia put on an impressive display today in the sprint racing division, winning 1 of the 3 heats and placing 2nd in the other two, putting her in a very worthy second place overall for the sprints.

As one of the more competitive girls on the Series, Olivia will be looking to capitlize on her performance in the long distance tomorrow, to try get the edge over Lena Augaitis, the on form racer of the event so far.

Noelani Sach wows the home crowd with an impressive 3rd place finish today
Noelani Sach (Naish) is the current German Champion and as such, gained a wild card entry to this year’s Camp David World Cup of SUP. Not to disappoint, Noelani put on an impressive performance today finishing in a convincing 3rd place behind Lena Augaitis and Olivia Piana (Fanatic).

At just 16 years old, Noelani clearly has an incredible future ahead of her, as she only goes from strength to strength on the World Series, and is looking in a great position on the European Cup presented by Starboard after her win in Finland.

The home crowd will certainly be going wild in support of their Champion tomorrow, so stay tuned to see how she does right there at www.watermanleague.com / World Series Facebook

The Sprint Racing today saw a challenging and highly competitive course that consisted of two beautiful downwind legs that allowed athletes to accelerate there way around the course to a dramatic finish.

It also allowed for some great Amateur racing too, as a full Men and Women’s division took to the water to do battle, much to the delight of the assembled crowds.

Meanwhile, the prevailing 20knt winds forecast for tomorrow will provide an unparalled opportunity for a phenomenal downwind run. While this wasn’t anticipated, in the interest of providing a world class platform for the world’s best, the organizers have figured out a way to hold an incredible downwind course that will provide some of the most exciting long distance racing conditions yet for the World Series athletes.