In past Events, Race Reports

The athletes faced headwinds of 20-30knots, heavy rain and temperatures that were often below 15°C. The infamous 3 lakes were once again more like oceans than lakes. I suppose that is why the Slotenmeer is called Slotenmeer and not Slotenlake (“Meer” means “ocean”).

Very surprisingly in this weather is that someone from a warm and sunny country won this years 220km Race. Outtrigger Star Steeve Teihotaata (Mistral) from Tahiti won for the men’s (Seychelle Hattingh won for the women beating last years winner Janneke Smits). While Steeve is not well known in the SUP scene, he is a huge star in the outrigger canoe world having won for example the Molokai OC-1 race twice.

Day 5 of 11 city is over. So 11 city is over.. After critical start i tried to go hard pace in the lead.. coud not break the draft train. So exploded in the end. Overall 5 th place in a high class field..

1 – After a really hard week and my broken Quickblade paddle on day 2 – I am happy with my position and with my second place yesterday..

2 – People who are not in the 5 stage race should not fight in the drafting train..makes no sense and is unfair for the 5 stage people. Does not matter if you are team weekend warrior or day paddler. I also dont start at marathon for the last 5 ks….

4 – Congrats to my daughter laura for paddling the last stage

The 2015 11-city is over. Though race with good competition. My board (Sprint 14′) had awesome speed and was often quickest off at the start but I missed the stamina, I had in the last years. This year a dissapointing 6th overall result and only one podium stage day finish. Positive this week was the amount of competitors from 24 countries. And the up and coming youth in the sport. Specially winner Steev from Tahiti and Daniel Hasulyo and Bruno Hasulyo who showed not only great speed and endurance but also a great mentality and positive attitude. They are a force to reckon with in the future. As always, a great organization by Sup11 – City Tour, in a very difficult, windy and rainy year. I am off to Canada for the Muskoka River X, a 220km, 2 day paddle race through Canada without any support. Starboard Stand Up Paddle Surfing @supskin @blackprojectfins @patagonia @mauijim @robijnsbv @suunto ‪#‎adventure‬ ‪#‎explore‬ ‪#‎worldtraveler‬ ‪#‎outdoor‬ ‪#‎travelingram‬ ‪#‎followme‬ ‪#‎starboard‬ Sup11 – City Tour Velocitek

If you are curious how the current #1 is paddling?! Check the video of Seychelle Hattingh!

Congratulations to all winners and finishers and huge thanks to the organizers and volunteers who worked 16+ hours a day in rain and wind to make this happen!

Aside from the new faces winning, an interesting element this year was also that there were staggered start times. Tour athletes 9:00, women 9:30, men 10:00. And that women are not allowed to draft of men.

That was nice to sleep a little longer and that the women at the start as you don’t get all the men’s chop and waves, but it got harder during the race as women rarely had anyone to draft of (since only so few women) . Also the narrow calm creeks, that are protected from wind and used to be places where you paddlers can relax and gather some strength before the next stormy leg are not relaxing any more as every 10-15 minutes a draft train of men passes the tour athletes and women making some waves and it is difficult to get out of their way and not fall off. It was however nicer for the slower athletes and tour paddlers to see some more action and have company (also easier to find the way when the field of athletes is more stretched out – the signs seemed very scarce this year.)

Another change was that the finish of the already insanely long day 2 moved another 2km back, killer for those athletes who knew the old finish and then had to paddle another 2k. The good news is that the new finish sported toilets, showers and hair dryers. Speaking of showers, if you ever do that race, make sure you paddle with a few 50c and 1EUR coins in your pocket in case you are cold and desperate for a shower upon arrival. Would be great to add shower coins to the little bag of meal and drink tokens the athletes get with the goodie bag, and maybe have a tumble dryer and heating lamps in the massage tent. Or a mobile sauna, well one can still dream….

Peter Bartls point is also valid, that people who do not do the full 5 days should not fight for the draft trains but then again you can’t blame someone doing the day race to want to win or finish in a good position, so it would be hard to impose rules here, it should be self-controlled fairness that day race paddlers try to not interfere with the top 10 in the full race. 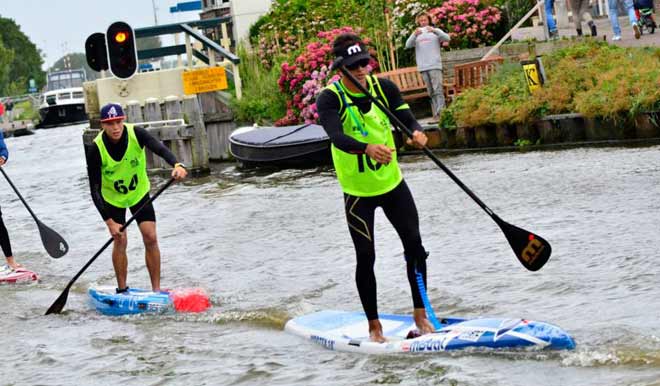 As for the boards, in quite a suprise both the men’s and the women’s race were won on a Mistral Vortex. Quite a turn of events after Mistral had no significant representation of either board or paddler in the 2014 event.

The beautiful photos below show the calm before and after the storm, they do not capture the icy rain and 25+ knots of wind the paddlers had to battle every day.

Life as a Stand Up Paddel Traveller