On the weekend of June 25, 2011, paddlers from all over the world, or that is mostly Itlay, Spain and France with the odd Kiwi and the odd German, came to beautiful Port de Hyères on French Cote d' Azur to compete in the Golden Island race, organized by Alexandre Gregoire.

I drove down there from Munich Thursday night, arriving in port de Hyères around midnight on Friday. The address was given as "Plage du Jardin des Mer" only that nobody in Hyeres seem to know it (or was that my French pronounciation), so after wandering around the harbour for an hour, I was delighted to see Luigi's Adrenalina  sports van and set up camp next to him (the actual street name was Avenue de Docteur Robin, dear race organizers, that helps foreigners with navis a lot!).

Saturday at 7:30 AM I someone knocked on my Campervan window . I was delighted to see that was Annabel Anderson. Hell, that's better than being woken up by the police or thiefs. 2 girls reunited after almost half a year, the last time we saw each other was for a snow paddle in Bavaria. Apparently, we had finally overcome the forces that tried to prevent us from meeting with nasty incidents like hospital attendance, broken toes and broken oil pressure lines. The weather was amazing, no cloud insight so yes, that would be a great weekend….

Saturday morning started with the 5k race in difficult conditions. Different from the St. Maxime Race, where you had to paddle a star-shaped course that was mostly with or against wind/current, the Hyères race was mostly parallel to the shore, with mean cross-wind, cross-swell, which involved paddling on one side for more than 1 km.

Didier Lentiel won the race.  Runner-Up was Annabel Anderson, who magically finished 2nd among all, men and women. It has however be mentioned that Eric Terrien and Gaetan Saene had decided not do that race. There were simply too many disciplines to choose from: 2 Slalom Races, 2x 5km races, a 25km race and the nautic mile record….

Personally I found the fact that there were 2 Slalom and 5km races a bit confusing and Annabel was also unsure about which ones were the important ones to do.

The nautic mile record was simple, you could attempt to set a record over that distance at any given time. Naturally the conditions were more favourable in the morning, but that meant letting go the 5k race on Saturday or the 25k race on Sunday. Gaetan Saene set the nautic mile record on a sea Kajak in.8:28 Eric Terrien was fastest on his Nidecker SUP in 10:36. WOW! Congratulations, both!

Saturday afternoon saw a very action-packed Slalom race with 8 very tight turns around buoys, where 4 paddlers competed against each other in heats, with the best 2 advancing to the next round.

Eric won the Slalom final, impressively demonstrating how fast you can turn on a SUP….

That was enough action for a day so it was time to party. There was a live band playing, there was great food and all that in a totally amazing beachfront setting. But most riders retreated early, as Sunday was another early start for the highlight of the weekend, the 25K race around the beautiful Golden Island. The conditions were more favorable than Saturday, the ocean was relatively flat, but still paddling around the island you would had to deal with all kinds of different conditions, wind and swell coming from front, side and back during the course of the race.

The riders started at plage du jardin des mer in front of the airport at the north-east end of the peninsula, paddled along the shoreline around the golden island peninsula in the most amazing scenery and arrived at another beach on the north-west, where they were greeted Hawaiian style with dancers, music and drinks. What a nice surprise, thanks, Alex for organizing that!

Eric won the long distance race on his Nidecker 18’ board in a totally amazing 2h16mnn35sec! Congratulations! He was followed by Didier Leniel and Gregory Closier. Gaetan Saene was fastest in the 12’6 category on his Mistral SUP, followed by Fred Bonnef on my Fanatic Fly Race 12’6”. I figured he would do the board more proud than me, so I had lended it to him for the race. Reco Leroy finished 2nd in the 12’ class. 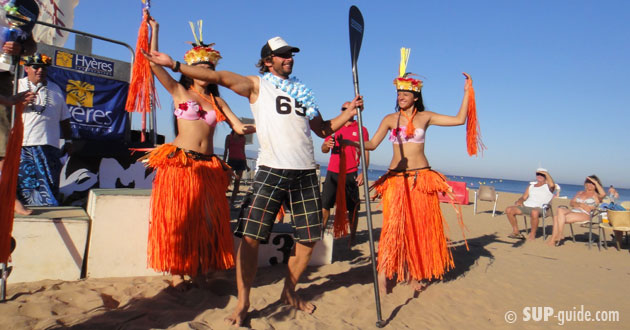 Belar Diaz, who had driven down from Barcelona on his BMW RS 1200 (yes, I have a thing for German technology) won the 14’ class on the Fanatic Fly Race 14’, followed by Lulu Langlouis and Annabel Anderson on her Starboard 14’ Ace. Annabel did not only finish 3rd among the men in the 14’ class (2hrs32) but also finished 9th, overall competing against men and longer boards. Amazing paddle!

There were 2 more races on Sunday afternoon, another 4km race and another action-packed Slalom Race. The weather was still warm and sunny it was more than 30 degrees the whole weekend and we had not seen a single cloud the whole time, so after an amazing Hawaiin style price giving ceremony that included some weird dance moves, everybody was sad when it was time to say goodbye on Sunday afternoon.

For me that meant a 1000km drive back to Munich (which ended up taking 26 hours with paddling breaks on Lago di Garda, Brennersee and Achensee), but the amazing setting, amazing people and great weather was definitely worth it. Big thanks, Alex Gregoire for pulling this amazing event. We will for sure be back next year!