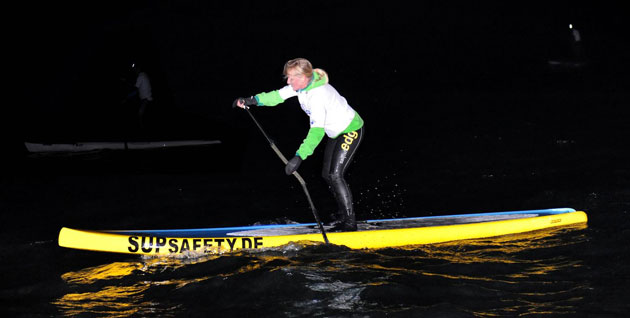 Brouwersdam in the South-West of the Netherlands has a lot to offer for water sport enthusiasts, thousands of them drive up to Brouwersdam for sailing, windsurfing and kite surfing every weekend. No matter what kind of water sport activity, Brouwersdam has seen it all. This year at the end of the season on de 22 of October however an event was held which did raise some eyebrows; the Night of Brouwersdam is a Stand Up Paddle race after dark and on open sea!

Temperatures drop fast in October at night so the competitors chose to wear 3mm wetsuits as they prepared themselves and made there way by shuttle bus to the starting area. At 19:15 sharp the small fleet took of from the beach and disappeared in the dark of night with the only directions by the coastguard in mind: Keep the lighthouse on your left hand side or you will end up somewhere in England.

The competitors stayed together for the first part of the race. With only 54 minutes and 33 seconds on the clock giant Dutchman Joost Wildenberg on a Naish ’14 Glide crossed the finish line first, staying only just in front of American Chase Paans on his Fanatic Fly Race. Third on the finish line was Ricardo Haverschmidt.Haverschmidt like many more had chosen to race on an all-round board. It was no real surprise that Cristina Bauer from Germany took first place in the women’s race; Cristina had prepared her race very well and had chosen the perfect setup for her C4 Waterman. She had no troubles keeping up with the men either. True sportsmanship was shown by the competitors as the finished racers headed back to sea to accompany first timer Chris Fraijhoven on his lastkilometres.

Do you want to participate in next year’s race? We would love to invite visitors from this website (both racers and amateurs) for next year’s event. Check the 2012 calendar on this site.