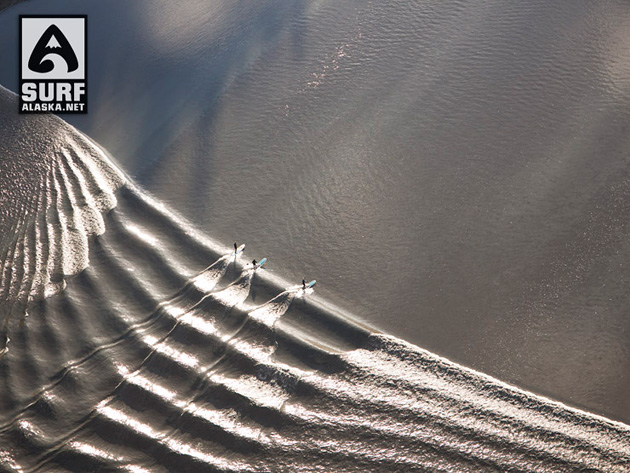 Due to our geographic location (water temp @ our local riverwave in Munich currently being 3.5°C), we are all into cold water and river waves. So we could not help but investigate a bit, after coming across some amazing shots of a wave in Alaska. Imagine a 5-mile ride. Catching a wave at breakfast, and riding it till lunch? How cool is that?

He shot it from his motor-powered paraglider. “People have been interested in the Turnagain Arm for a while but it’s often too difficult to stay on with a regular surfboard,” says Dickerson. But the arrival of Stand-Up Paddling in Alaska has changed that.

Stand Up paddlers can ride the bore @ large tides, it is formed when the outgoing current meets the incoming tide. When the low tide is entering the narrower part of the Arm (around mile marker 104 and 103 of the seward highway) the tide seems to gain speed and forms into 8-10 parallel waves, typically about 1-1/2 hours after Anchorage’s low tide, but when exactly it works is still a bit of a mystery.

It’s one of the world’s biggest bore tides and can be between 2 feet up to head high, but often it’s much smaller, and with a Stand Up Paddle board chances of catching it are maximized. Surprisingly enough, the water temperature at TA is reasonably warm: 8°-12°C (47-53°F) in September, when these shots were taken. However, currently the water is -1.0°C (30°F), but hey, that’s only 3 degrees colder than our river wave! But no, you wouldn’t want to ride the wave at this time of the year,  as there is too much ice in the Turnagain Arm in the winter, and also very little water at low tide since the rivers are mostly frozen up.

The wave can be ridden for 4-5 miles, which is almost an hour of a ride! Imagine getting cramps from doing so many turns on your board!

Apart from that, Turnagain Arm bore wave is the only one that occurs in the far north and the only one bordered by mountains, making it the most unique and most geologically dramatic bore tide in the world.

Have a look at this amazing video…

When or how often can be it surfed?

In theory, you would expect the largest bore tides to occur on tides with the highest tidal differential. In reality, they tend to occur just before or after that. This means your chances for catching a large bore are best during the five-day window that surrounds the new and full moons. Extreme low tides promise the largest bores because of the amount of water rushing back into the inlet. Also, tides tend to be greatest annually at the equinoxes (March and September), particularly during the fall equinox. So have a look at anchorage tide tables, moon phases and go and figure it out….

Where exactly is it located?

See below from google maps. It’s amazingly accessible with the seward highway running right next to it.

WARNING: Don’t walk out onto the mud flats—people have died by getting stuck in the glacial silt and being drowned by the incoming tide!

More great shots of this wave can be found on surfalaska.net