Are you looking for a totally awesome place to paddle? How about the Virgin Islands? They are a stunningly beautiful collection of about 70 islands, inlets and Cays in the Caribbean that are incredibly close together. They were an El Dorado for pirates in former times, with their hidden and unaccounted bays, perfect to hide and wait for the Spanish Ships that were loaded to the brim with gold from the new world.

Today, they are paddler’s paradise offering everything from calm bays for beginners to crossings and crazy downwinders for experienced paddlers and if you are lucky you might find some really good uncrowded waves, too! 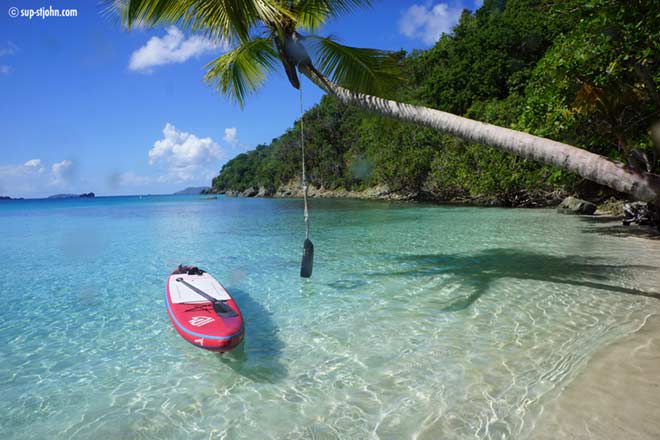 The Virgin Islands are the western island group of the Leeward Islands, which are the northern part of the Lesser Antilles, and form the border between the Caribbean Sea and the Atlantic Ocean. They are located about 80 km east of Puerto Rico, which is 1500km South East of Florida. Christopher Columbus named the islands after Saint Ursula and the 11,000 Virgins (Spanish: Santa Ursula y las Once Mil Vírgenes), shortened to the Virgins. 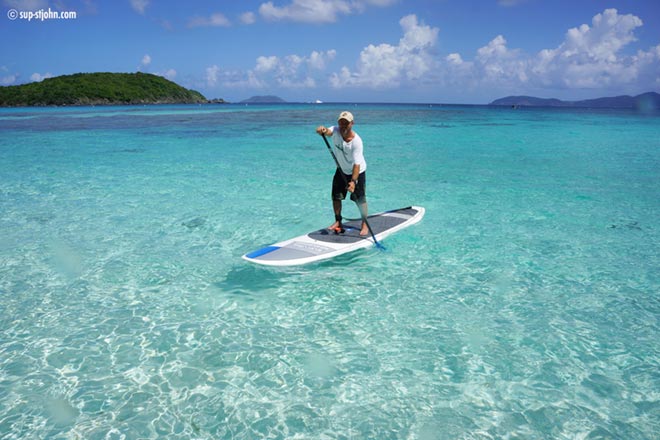 Politically, the eastern islands form the British Virgin Islands (Tortola, Jost van Dyke, Virgin Gorda, Anegada) and the western ones form the Virgin Islands of the United States (St. Thomas, St. John, St. Croix). That’s actually the only annoying part, when paddling / island hopping, you need to take your passport checking in and out between US and UK Customs & Border Protection. The currency is US$ and Motor vehicles are driven on the left-hand side of the road in both the British and the U.S. Virgin Islands, although the steering wheels on most cars are located on the left side (as is the norm for drive-on-the-right localities).

St. Thomas is very American, you will find McDonald’s, Kmart and the likes and has a population of over 50.000. You will have a wide choice of stores, restaurants and accommodation, but for a true island experience you might want to head to it’s smaller brother, St. John, with only 4000 inhabitants. Tortola in the BVI is kind of in between with 24.000 inhabitants. 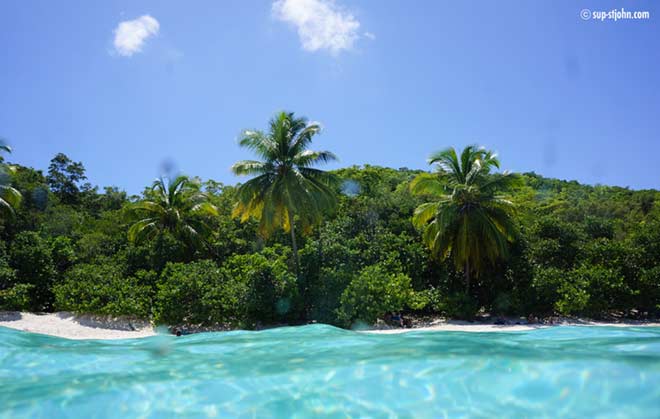 Accommodation is expensive in the VI, even “budget” hotels costs between 80 $ (low season = summer) and 150$ (high season) per night. There are however campground on all 3 islands and you can find reasonably priced accommodation on airbnb. 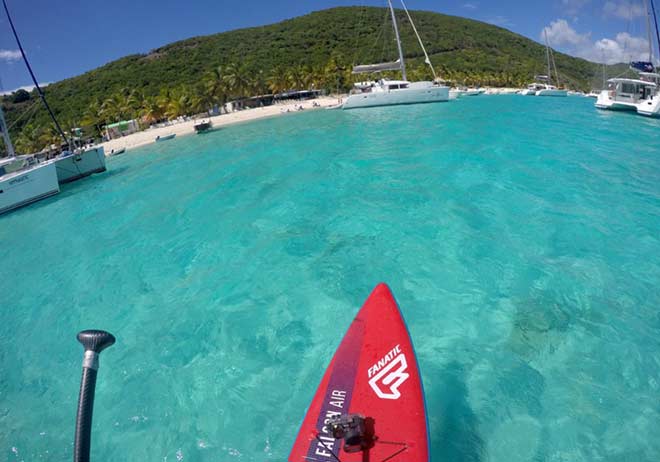 White Bay on Jost van Dyke is one of the world’s most beautiful beaches, and a visit of the Virgin Islands is not complete without a stop at the infamous “Soggy Dollar Bar” which takes it’s name from the sailors swimming ashore (since there is no dock) to spend wet bills. 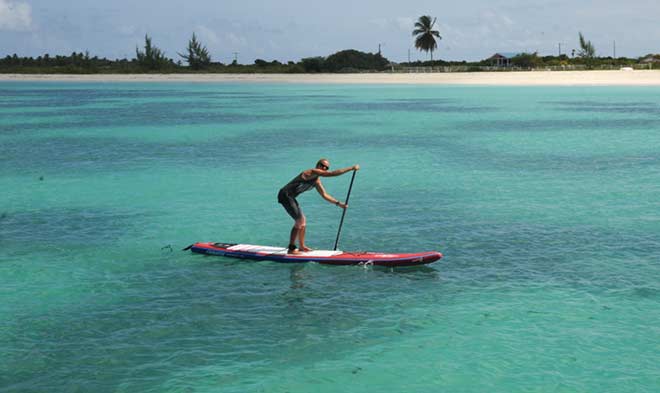 Anegada (literally “drowned island”), the only all-coral atoll in the BVI is a mere 28 feet above sea level. It is 20 miles North of Tortola, Surrounded on one side by the infamous Horseshoe Reef, a watery graveyard for many an unsuspecting wind-tossed ship, it is known to have over 300 wrecks in its waters, some of whose artifacts can be seen in a local nautical museum.

Known for its endless white sandy beaches and salt ponds that host a growing flock of pink flamingoes, Anegada is a paddler’s delight. Rare indigenous iguanas are nurtured by the National Parks Trust and released in the wild, and many rare types of plant life are also found on this unique, long, flat atoll.

Virgin Gorda is the third-largest (after Tortola and Anegada) and second most populous of the British Virgin Islands (BVI). Located at approximately 18 degrees, 48 minutes North, and 64 degrees, 30 minutes West, it covers an area of about 8 square miles (21 km2). Christopher Columbus is said to have named the island “The Fat Virgin”, because the island’s profile on the horizon looks like a fat woman lying on her side 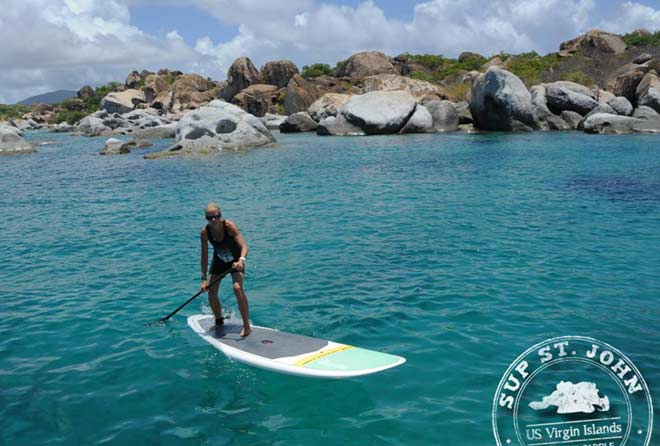 The Baths are a sublime jumbled collection of sky-high granite boulders by the sea they make Virgin Gorda one of the BVI’s major tourist destinations.. The rocks are made of volcanic java from about 70million years ago and form a series of grottoes that fill with water and shafts of kaleidoscopic sunlight and look truly otherworldly.

In theory all the VI islands are within paddling distance of each other, so you could just grab a board, sleeping back, hammock and passport and explore the islands via paddleboard. In reality the wind is often 25knots and more, so you have to take that into account when planning your route, choose a ferry or powerboat for the upwind legs. Personally I have paddled from Tortola to Jost van Dyke and back and circumnavigated St. John on a Fanatic Falcon Carbon 14’ Race Board.

The Virgin Islands are a true downwinder heaven. Some great runs are:

Surfing in the Virgin Islands 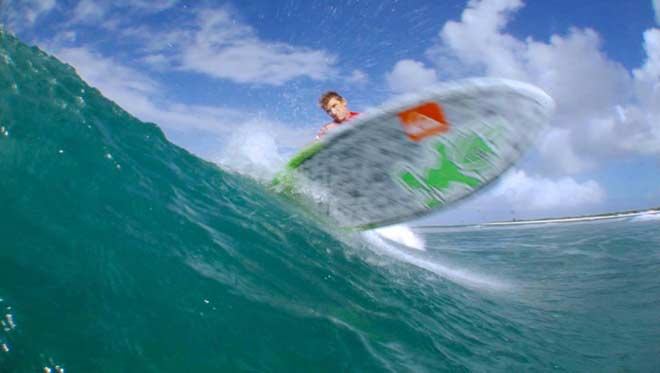 There are a few surf spots in the Virgin Islands. Many of the surf spots can be fickle to swell and wind direction, but when those conditions are right, they can be world class! Usually surf is more consistent in the winter months (November to February but can extend into May), when strong North Swells from winter storms off the US East Coat produce about large swells, the North facing spots will break.

In summer, usually around August the swell energy shifts and the islands get wind swell or hurricane generated ground swells, so you can get lucky and find some world class surf. During this time of the year, the SE facing spots will work. The tidal range is minimal (only about a foot) so most spots work at any given tide level.

I’d say the average wave size in winter is about 3 feet, so with a SUP / Paddleboard you will catch more waves vs. a surfboard. Here are a few spots. We respect “secret spots” so we only list spots that have are widely known and have been published before. 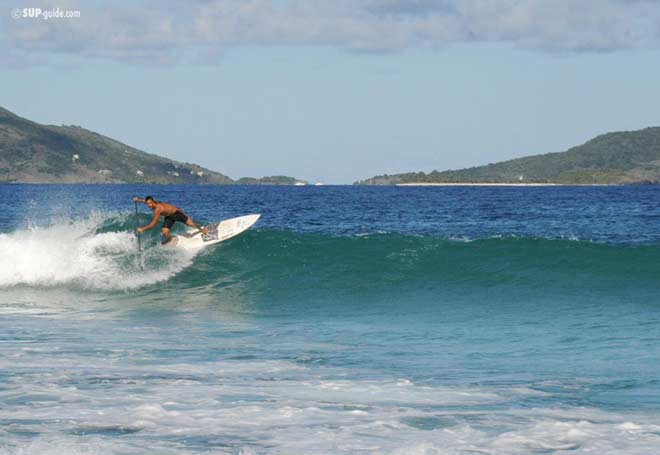 It is warm year-round on St. John. The average max temp. is 84-89°F, with August being the hottest month and Dec-Jan the coldest. The average min temp is 73°F-80°F. You will rarely need anything long, except for supermarkets, where it is freezing or to protect yourself from sunburn or bug bites. The average water temperature is 82°F.

February to May are the driest months, October to January the wettest. It can however heavily rain any day of the year, but usually it is gone as fast as it came. Rain is actually a welcome relief from the heat and also helps to refill the water cisterns. 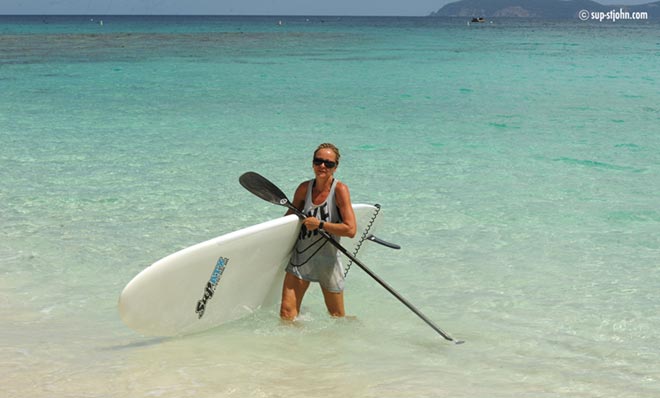 September is dead low season and many businesses are closed. Other than that, any time is good to visit. The climate is most agreeable in December through February, but these are also the most expensive months (however some good deals can be made in the 2nd half of February).

Personally, I do not like July and August too much, because it does not really cool down at night, but in a villa with A/C that would not be a problem. Good options for visiting are the shoulder months, April and May as well as November (November can be wet however). These months give a good compromise between wetter and prices.

If you are a surfer or like waves, you are more likely to find them from November to April. But tropical storms can generate some random big swells in summer as well. 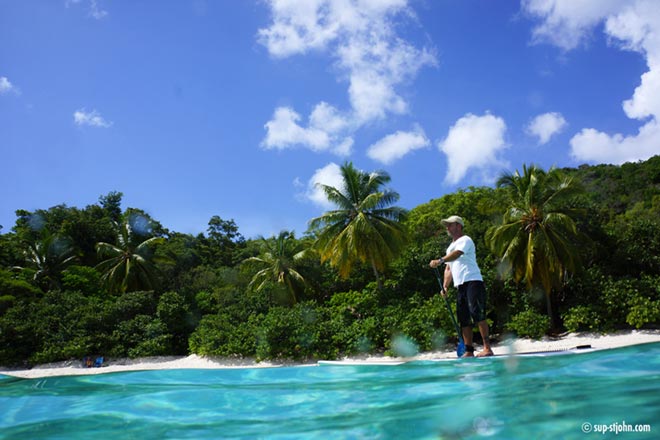 How to get to the the Virgin Islands?

You will have to find a flight to Beef Island (EIS), Tortola or St. Thomas (STT). From Europe, you can fly with KLM or Air France to Saint Martin and then connect to Beef Island via Liat, or you can fly in via Puerto Rico or the US Virgin Islands (St. Thomas), typically with American Airlines. This is usually cheaper but you have to go through US customs. From St. Thomas, take a ferry to Tortola West End. European Citizens don’t need a visa, just a passport.